I am embarrassed for the pepole of CinCinnati 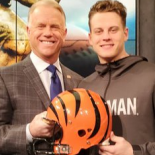